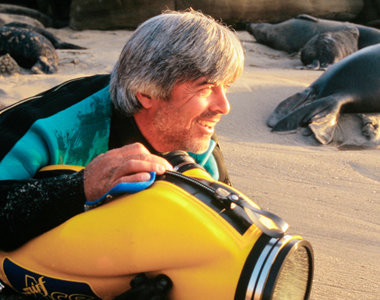 “If you want to get away from it all and see something that you have never seen before, get in a submarine!”

Mike deGruy was an American filmmaker specializing in underwater cinematography. He wanted to become a scientist in the first place, studied Marine Zoology and worked at various research facilities.

But after he had had the chance to document an underwater expedition with a 16mm film camera for the first time, he quit his academic career.

He realized that he could bring the fascinating world of the oceans to much more people as a documentary filmmaker. Together with his wife Mimi Armstrong deGruy he created many award-winning wildlife documentaries for the BBC, PBS and National Geographic. On top of that he advocated for marine conservation.

In February 2012 Mike deGruy died in a helicopter crash. The film Film „DIVING DEEP – The Life and Times of Mike deGruy” of Mimi Armstrong deGruy portraits the cheerful filmmaker and relentless activist in a very special way.